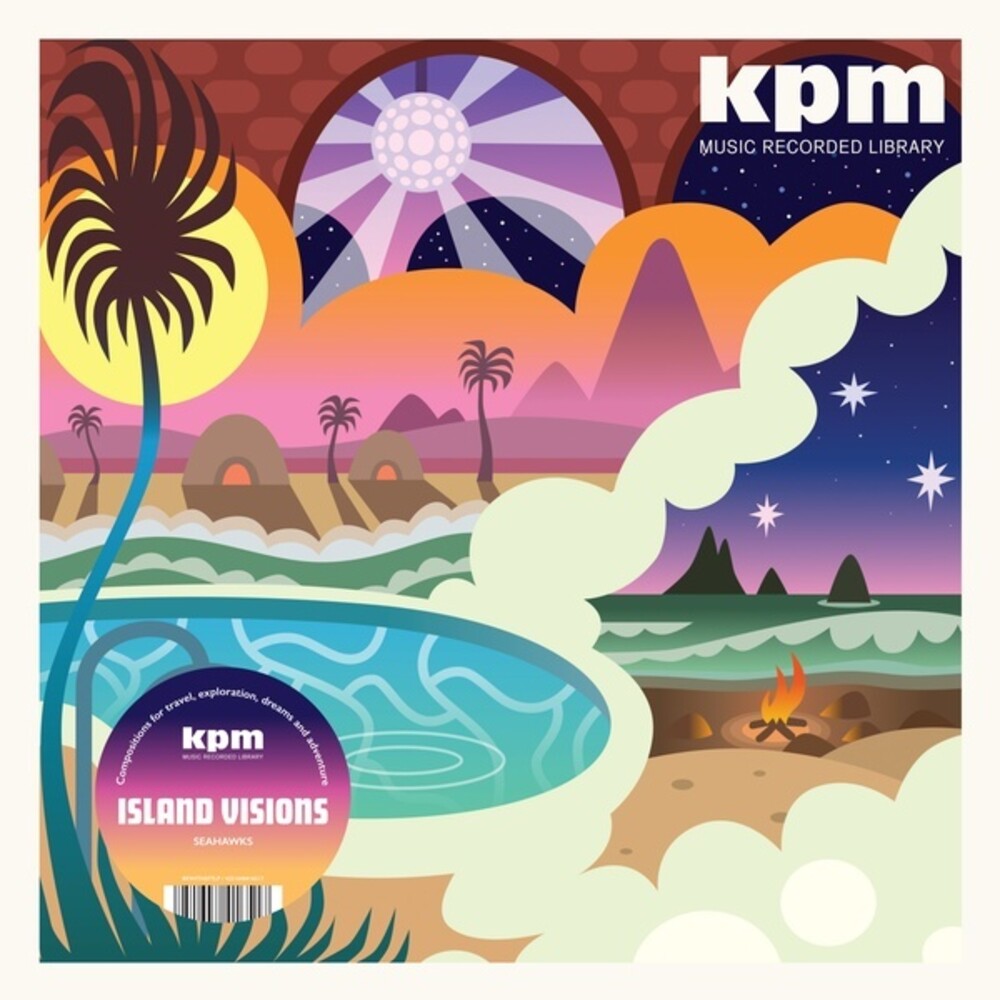 Jon Tye and Pete Fowler have been making music as Seahawks for a decade now. Given the sounds they've been exploring over those ten years it was a cosmic inevitability that they would be asked to contribute to the catalogue of the legendary library label KPM.They replied with Island Visions, an exploration of sound for vision where they construct "audio micro-worlds to explore and inhabit". A way to transport the listener away from the everyday without the bother of getting on an aeroplane. Mind travel is space travel after all, and much better for the environment.Mostly recorded at The Centre Of Sound in Cornwall, with additional recording at Studio 34 in London, Jon and Pete's travelling companions on this particular trip were boogie wunderkind Sven Atterton on fretless bass and keys, Nick Mackrory on percussion and the Seahawks live team of Dan Hillman and Alik Peters-Deacon.From the grooves of Brian Bennett to the moog vibrations of Mike Vickers, the lush textures of Les Baxter to the experimental sounds of Delia Deryshire and David Vorhaus, this new music channels sounds and moods from across the KPM universe.The spacious "Hot Sand Shuffle" opens the record with some of Seahawks' familiar "deck-shoegaze". The slinky digi-dub of "Sky Blue Sky" follows, gently encouraging us to lay back and relax. "Mystic Beach" is a refreshing ocean spray of a synthetic groove that clears the head, priming a pathway to receive "Crystal Forest", a new age house groove of birds and flutes.Dense, deep and dreamlike, "Distant Shore" is ambient rainforest house with a 90s vibe, it's dense foliage clearing to let us bask in the shimmer and shine of "River Run". Hang drum, electric gamelan, flute and loon close side A.Side B bounces into being with "Catch A Wave", an upbeat beach groover of synthetic guitar, effervescent synth and snappy drums. Equatorial bubbler "Paradise Bird Bath" soon glides in with marimba, crisp beats and fat synth bass. Fender rhodes, space echo and fretless bass make "Smooth Runnings" a laid-back poolside groove."Spirits Have Flown" conjures a hazy vibe with marimba, sax, synth funk bass and chilled beats before "Rolling Deep" serves up a light cocktail of sultry rhythms, refreshing textures, cooling sax and fretless bass. Almost-title track "Island Blues" brings the horizontal poolside feels with melodic chimes, oboe and more fretless bass for maximum vibrations. The marina drone of modular electronics, celestial trumpet and jungle ambience pay the album's final respects to the cosmos on "Sun Salute".Like many KPM suites, this is a record of two distinct sides. The sunrise of side A brings a deep meditation, a journey within to renew the jaded self. Side B refreshes with cocktails by the pool and a chance to groove away the evening at some sunset beach party before dancing under the stars in the house of dreams.Pete's front cover for the LP is part map, part postcard: "the record has five different sections and I wanted to reference those in the worlds they created, musically and physically. From beach campfire, to poolside hanging and nighttime dancing. A kind of portal to those places and the pictures they inspired in my mind. All places we'd like to be in this turbulent year". The track descriptions on the back help guide the way.2020 marks 10 years since Ocean Trippin', the first Seahawks release, and Island Visions is the perfect distillation of the sounds, sights, textures and moods that Jon and Pete have been exploring over the last decade. Sunrise to sunset condensed to two sides of an LP. The normal rules of space and time don't apply here.This is the first time Be With has worked with Seahawks, but individually Jon and Pete have been members of the extended Be With family since forever (Pete did those posters for our Ned Doheny tour and we worked with Jon on the vinyl version of Hatchback's Colors Of The Sun). Of course we were going to put this out on vinyl.Mastered by balearic engineer of choice (and Be With's regular audio co-pilot) Simon Francis, cut by the legendary Pete Norman and pressed in the Netherlands by Record Industry, the sonic frequencies of these Island Visions have been precision tuned and encoded for optimum traveling conditions. Take the trip.